JamMan has three modes of operation:

Each operating mode has its own set of features and offers hands-off control with either footswitches or MIDI.

In Echo mode, this JamMan provides echoes up to 32 seconds long.
Instead of setting the delay in milliseconds as with most units, just tap in a tempo and you'll have a delay that fits with your rhythm.

You can easily set the echo rate while a song is being counted off, or change it at any time simply by tapping in a new tempo, as well as control the delay feedback.

An Echo Divide function provides rhythmic variations by allowing you to divide your echo rate by two, three or four.

For example, you can tap in quarter-notes, then select eight-notes at the same tempo with a single button push.

Shorter echoes that might be difficult to tap in precisely are instantly available.

This JamMan can sample sounds up to 32 seconds long, and play them either forward or backward.
To record a sample, push the front panel TAP button (or use the provided footswitch) to start recording a sample; push it again to stop recording. Once you've got your sample, hitting TAP triggers playback.

If you want a sound itself to trigger recording, you can set an Audio Trigger to start recording when audio is present.
Once you've captured a sample, audio can trigger the sample playback. The Audio Trigger threshold is variable, allowing you to have the sample triggered by audio peaks only, for example.

JamMan's Loop mode is useful for composing or figuring out songs.
Tap once at the downbeat of a phrase to start recording, and once again at the end of the phrase to stop recording.
JamMan will immediately begin looping the phrase in tempo.
While it loops, you can solo along with it, add new layers of sound, or experiment with new ideas.
JamMan also can record up to 8 different loops, allowing you to switch between loops and selectively replace them.
Combined loop time is up to 32 seconds.

JamMan can also send out MIDI clock signals in the tempo established by your loop, allowing sequencers or drum machines to sync to your tempo.

Alternatively, you can send MIDI clock into JamMan, allowing you to capture loops which are perfectly timed to the MIDI tempo. This makes playing in perfect sync with a drum machine a breeze!!!

This JamMan's real-time controls can be remotely activated via a 3-button footswitch (such as the Digitech FS300). 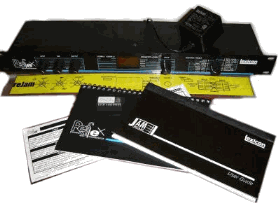